The Supreme Court has ruled the Banesto “Hipoteca Tranquilidad” as abusive, since it is considered that it was a complex product of which the client was not well informed, seeking the benefit of the bank, putting a clear imbalance to the individual. It has opened the way for the claim of the suffered abuses, but first we must explain:

What did Banesto “Hipoteca Tranquilidad” consist of?

The one that was Banco Banesto, current BancoSantander, in 2007 and 2008 offered a fixed-rate mortgage that was called “Hipoteca Tranquilidad”. The objective of this mortgage was to squeeze out the fear of the constant rise in the Euribor during that period of time, establishing a fixed interest of between 5% and 5.75% during the first 10 years of the mortgage. This advertising claim was made knowing that the Euribor would not continue on rising, being at that time at 4.75% and going down after that.

The “Banesto Tranquilidad” Mortgage had abusive clauses in which the bank was not transparent with the consumer. They omitted that both during the period of the fixed quota of 10 years and at the end of it, there was a growing geometric quota of approximately 2%, creating large overruns on individuals compared to other mortgages of 9.7%. Moreover, clients had to pay first the interest on the capital of the mortgage and then the mortgage loan itself.

Finally, the time of payment of the mortgage was not established by the bank, so the client did not know how many years it would take to pay his mortgage because the term was set as a variable depending on the variations in the interest rate.

Why do we have to claim the “Banesto Hipoteca Tranquilidad”?

Neofin Asesores help to claim the mortgage “Tranquilidad Banesto” to get the individual recovered from the economic suffered economic abuses. Send us your query and we indicate you the viability of it for free. 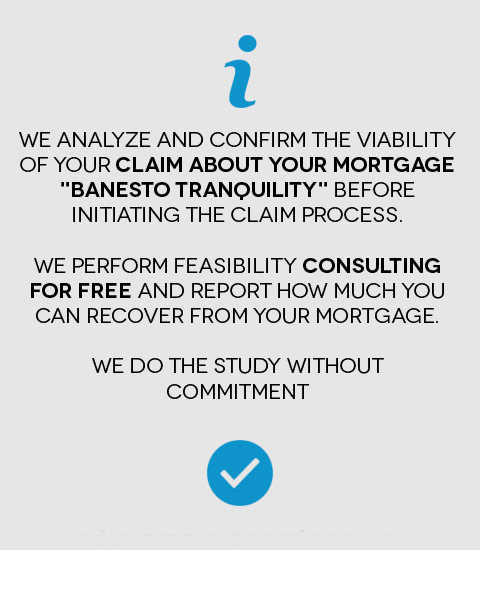